Of Missouri’s 114 counties, 44 derive at least one-fourth of their total value-added from agriculture and forestry. One out of four jobs in 41 of Missouri’s counties are agricultural. But the agriculture industry does not only impact rural areas of the state; in the St. Louis area, agriculture, forestry, and related industries contribute nearly $18 billion in sales.

The maps below display data about Missouri’s agricultural employment and economic contributions at the county level. Click the map to explore the data in a new window.

The latest USDA Census of Agriculture, conducted in 2012, shows there are 99,171 farms in the state of Missouri. Of these, the vast majority are family farms. The average farm size, 285 acres, falls below the national average of 434 acres. The average age of Missouri farmers, now 58 years old, continues to increase. Although there is a strong group of farmers in the 45-54 year age group,  far fewer young farmers are involved in production agriculture. 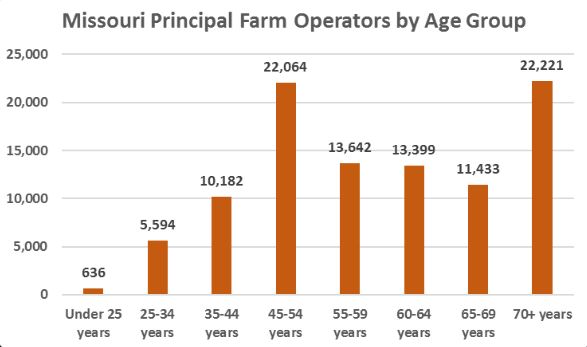 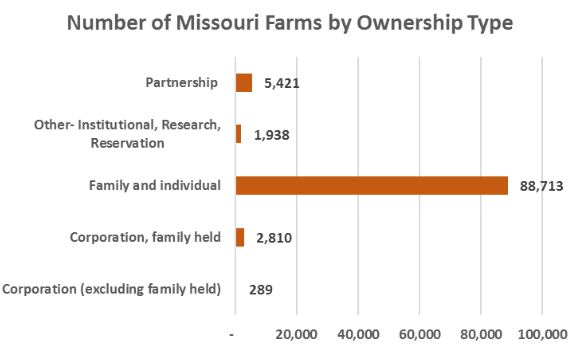 Multiple market research reports and consumer studies show that local food sales continue to increase across the US. A USDA Economic Research Service report shows that the number of farms with direct-to-consumer sales increased by 17% between 2002 and 2007, and by an additional 5.5% between 2007 and 2012. It has been assumed that local food sales – whether in farmers markets, CSAs, or in retail markets – should positively impact the local economy. Recent research out of the University of Missouri has quantified the  impact of local food systems, specifically within rural Missouri counties. This research found that,  in Missouri, local food markets generate more indirect sales, direct employment, and indirect employment than conventional markets. With an increasing trend toward local foods among consumers, expansion of local and direct food sales can be good for a community’s bottom line.  Producers increase a community’s GDP through their own net income, but the community at large also benefits through increased agricultural and retail/resale employment, and through increased indirect sales.  While growing fast, the market for local foods is still comparatively small, but such markets can be an good tool for rural economic development.